Jeff founded Carolinas Baseball Center (Charlotte, NC) in 2007 and since then his focus has been on developing and creating opportunity for high school players with the desire to play at the next level.

For 14 years Jeff played professional baseball, including six years in the Major League with the White Sox, Mariners, and A's.  Through opportunities and exposure created by Jeff, over 200 players have moved on to play at the collegiate and professional levels and the number continues to grow. His reputation today is as an authority on travel/showcase baseball and a national leading source for player evaluation and promotion.

For 13 seasons John pitched professionally, reaching the Major League with the Braves, Tigers, and Phillies. Now that John has moved on from playing professionally his focus has turned to development. Currently John is involved in coaching teams, individual lessons, and team evaluation and consultation in the Charlotte, NC area and beyond.  John resides in Charlotte with his wife, Anna, and sons Grady & Hayes.

Ross Gload originally hails from Long Island, NY where he is the owner of several county home runs records, as well as the recipient of the “Carl Yastrzemski Award”, which is awarded to the most outstanding high school player in Suffolk County.  Following high school, Ross attended the University of South Florida in Tampa, FL, and in 1997 was drafted by the Florida Marlins.  Ross played 15 seasons of professional baseball, which includes parts of 10 different seasons in the Major League.  Ross’ Major League stops included the Chicago White Sox, Colorado Rockies, Florida Marlins, Philadelphia Phillies, and New York Mets.  Ross earned a World Series ring with the White Sox in 2005.  Ross has made his home in Charlotte since originally playing here with the Knights in 2003.  He is married to his wife, Betsy, and is father to his two children, Greyson and Belle.

Dusty played professionally for 14 years as a catcher, reaching the Major League in 2002 with the Kansas City Royals.  Dusty played parts of 8 seasons at the AAA level.  After retiring from playing with the Phillies following the 2007 season, Dusty went straight into coaching.  He was hired by the Phillies to manage in their minor league system in October of 2007 and he is still a coach.  Dusty won a championship in the South Atlantic League with the Lakewood Blueclaws in his 2nd year of managing.  In 2012-2016 he managed the AA level Reading Fightin Phils, he then moved up to lead the AAA Lehigh Valley IronPigs in 2017, and is now in his first Major League coaching assignment - as the third base coach of the Phillies.  Dusty’s coaching resume also includes a championship in the Arizona Fall League and a catching instructor for the MLB Brazilian Elite Camp.  Dusty resides in Charlotte, NC with his wife Heidi and their four children Elle, Huck, Maeve and Gus.

Eddie was in the rodeo for 19 years as a bullrider, bullfighter & rodeo clown.  Eddie has spent over 22 years working in pro baseball.  He has coached all age groups through his lifetime.  Eddie owns EA Sports Fields and was a huge part of buidling 8 of the last 12 major league fields.  He was also a part of building oer 50 minor league fields which include Truist Field.  Eddie as coach all age groups throughout his lifetime.  Eddie and his son Hunter, currently resides in Clover, South Carolina. 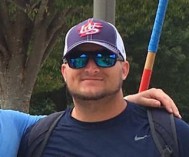 Andrew is a coach that has been working with USA Baseball NTIS since 2012 and was one of the firs team members to play for CBC.  He attended Olympic High School where he was a 3-year varsity team starter and earned All-Conference honors 2 years in a row.  Andrew is an alumnus of Western Carolina University where he received a Bachelor of Science degree in Sport Management along with a Minor in Marketing.  Andrew is the Associate Reginal Director of two NTIS regions (Northeast and Southeast), and  works with the IC Showcases organization and is the Secretary of the U Deserve a Chance Foundation.  Andrew currently resides in Lake Wylie, South Carolina.

Dirk attended Towson University where he studied Sport Management.  Towson is located in Baltimore, Maryland.  Dirk's conference was in the Colonial Athletic Association (CAA).  Dirk positions played at Towson were INF, 3B, 2B, SS.  He was a four year starter for Towson.  Dirk has coached for CBC since 2019 and instructed Camps at Towson University.  Dirk currently resides in Fort Mill, South Carolina.

Joe joined CBC staff as a 12U coach in September 2020.  Joe was born and raised in New York and just recently moved to Charlotte in the summer of 2020.  Joe is an Elementary School Physical Education teacher at Charlotte Lab School.  Joe has been coaching youth sports for the last 8 years.  He has coached all ages from 8 -15 years old.  He has coached all different sports including basketball football & baseball programs.  Joe will be working with our younger ages during the Winter Sports Performance Training program for 2021.  This program will focus on speed, agility and coordination drills.